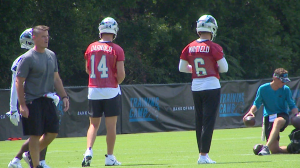 All eyes on Sam Darnold and Baker Mayfield as they compete to be the team’s starting QB. Darnold took all of the first team reps, while Mayfield worked with the second team. Panthers head coach Matt Rhule says the roles will be reversed when the team hits the field for practice on Thursday. 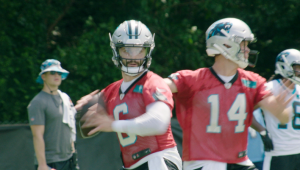 Meanwhile the other two quarterbacks, P.J. Walker and third round draft pick Matt Corral are splitting reps with the third team offense. On Tuesday, general manager Scott Fitterer said the team only plans to keep three quarterbacks on the roster.

INJURY NEWS: The Panthers placed last year’s first round draft pick, Jaycee Horn on the active physically unable to perform list (“PUP list”). The second year cornerback had soreness in his surgically-repaired foot. Rhule says it was a precautionary move and that Horn’s status will be day to day.