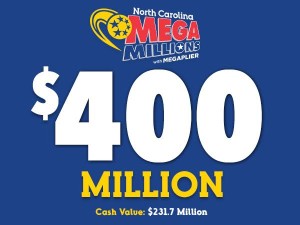 The $400 million prize is the third largest Mega Millions jackpot ever offered in the month of July and the largest for this month since July 2018. A North Carolina winner would have the choice of taking the $400 million as an annuity or $231.7 million in cash.

“When you see a big number like $400 million, you stop and think about the impact that a win like that would have on your life,” said Mark Michalko, executive director of the N.C. Education Lottery. “That’s why it’s called Mega Millions. Good luck this weekend to everyone in North Carolina who is trying for that big payout.”

Friday’s jackpot total received a big boost as it increased by $30 million from the $370 million jackpot that Tuesday night’s drawing offered.

Even though the jackpot remains up for grabs, North Carolinians are still taking home plenty of prizes. Tuesday night’s drawing had more than 20,000 total winners in the state.

Players can buy Mega Millions tickets at any lottery retail location or through Online Play on the lottery’s website, www.nclottery.com, or with the lottery’s app, the NC Lottery Official Mobile App.

Ticket sales from draw games make it possible for the lottery to raise more than $900 million a year for education. For details on how lottery funds have made a difference in all of North Carolina’s 100 counties, click on the “Impact” section of the lottery’s website.