CHARLOTTE, N.C. — It’s a classic David vs. Goliath story, except there are a billion Davids… and David is kind of a jerk.

Ash trees, the gentle giants that stand tall all over North America and Europe, are being felled by a minuscule menace: the Emerald Ash Borer. Believed to have come over in the late 90s via shipping containers in Asia, the invasive species has no natural predators and has a particular hunger for the tree which bears its name.

“And once there was evidence of it, it was really hard to figure out how to protect against it,” says Julia George, the owner-in-training at Heartwood Tree Service in Charlotte. “It was easy to tell because there are so many ash trees in the Northeast and now all those forests are just gone.”

The tiny insect is no bigger than a penny, but wreaks havoc on ecosystems across the Northern Hemisphere. In portions of Europe, nearly 90% of ash trees are thought to be infested. Closer to home, National Capital Parks – East in Washington, D.C. has marked a 63% decline in the live ash population. While the problem in the Queen City isn’t as severe, Julia and her team at Heartwood Tree have found evidence of the unwelcome guest in our canopy.

“Things like D-shaped exit holes in the trunk, that’s a telltale sign that the emerald ash borer has already been in the tree and is on its way to the next one.” 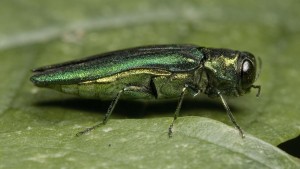 Once inside, the emerald ash borer mates and then reproduces. Its larvae, eating away at the trunk in these channel-like formations, which damages the tree and disrupts its flow of nutrients. Once trees start showing signs of damage, it’s often too late.

Don’t write the obituary for *all* of them, though. Here’s how George says you can fight back.

In short: preventative maintenance is key to saving your big ash tree.