HICKORY GROVE N.C. – A 14-year-old faces a slew of charges after leading police on a car chase from Hickory Grove to Cornelius on  Tuesday, July 5th.

According to a news release the 14-year-old teen, wanted on outstanding warrants for robbery and shooting in an occupied space, initiated the pursuit involving Hickory Grove Reduction Unit and Crime Gun Suppression Team.

Officers say, during the pursuit, the suspect alternated operations of the stolen vehicle with another juvenile.

The 14-year-old reached around 100 miles per hour, drove into oncoming traffic, and failed to stop at numerous traffic lights and stop lights, according to a news release.

The chase led both units into Cornelius before the suspect and two passengers crashed the stolen car and attempted to flee from the vehicle, officers say.

CMPD teamed up with The Cornelius Police Department to arrest all three juvenile suspects. Their names have not been released due to their ages.

During his arrest, the 14-year-old was found to be in the possession of a concealed handgun that he allegedly used to fire in an occupied dwelling. 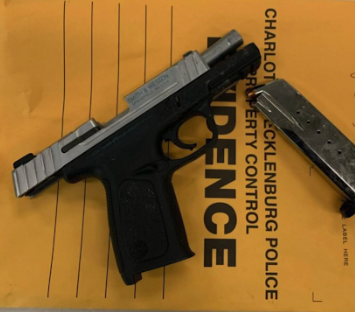 He has received the following charges:

All three suspects face charges of possession of a stolen vehicle and resisting officers.